CUSMA: The Canada-U.S.-Mexico Agreement – A Rundown of Its Effects & Reception 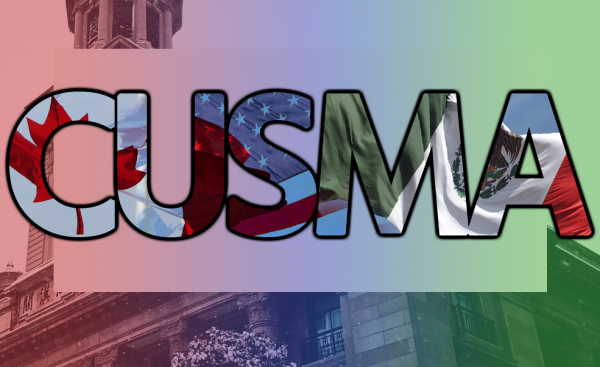 On November 30th, 2018, a new trilateral trade agreement between Canada, the U.S., and Mexico was signed. This trade agreement goes by many names depending on which country observers originate from: USMCA if observed in the U.S., T-MEC in Mexico, and ACEUM in the French-speaking parts of Canada. For most Canadians, you’ll come to know this trade agreement by the name CUSMA: the Canada-U.S.-Mexico Agreement.

Currently, the three North American countries are already tied together in a trade agreement called NAFTA. NAFTA was signed in 1992 by the leaders of the U.S., Mexico, and Canada, and put into force on January 1st, 1994. The purpose of NAFTA was to grant each country Most-Favored-Nation status (which gives a country the best possible tariffs on certain goods), eliminate trade barriers and facilitate the trade of goods and services, promote fair competition, increase investment opportunities, and ultimately, to establish a framework for future cooperation regarding trade between these three highly involved countries. In the time that it has been enforced, NAFTA has already achieved this goal; however, times have since changed. Criticisms of NAFTA by the countries’ modern leaders have called for the trade agreement to be renegotiated, and that’s where CUSMA comes in.

CUSMA is intended to rise above NAFTA in delivering the most ideal benefits of a trade agreement to each participating country. Initially conceived to encourage agricultural trade between the U.S. and Mexico, the deal was amended to include Canada near the end of September, 2018. CUSMA is designed to address concerns in the modern trade industry and focus on strengthening the economic ties between the three countries.

Some of the provisions of the agreement include:

Dairy – The U.S. will receive greater tariff-free access to the Canadian dairy market, and vice versa.

Automobiles – According to CUSMA, a minimum of 75% of an automobile’s value must be generated from within the U.S., Canada, or Mexico—meaning that at least 75% of an automobile must be manufactured within those countries. Discussions regarding further stipulations surrounding automobile manufacturing have arisen, particularly focused around the domestic sourcing of automotive goods from the U.S. There remains a possibility of a 25% global tariff being enforced on automobiles, with exception to passenger vehicles, pickup trucks, and auto parts from Canada and Mexico.

Labor – Bargaining capabilities of labor unions in Mexico in particular will undergo improvement. This will also affect the minimum wage requirement of the automotive industry, suggesting that up to 45% of automobiles manufactured in these countries must be made in a factory that pays a minimum of $16/hour.

Intellectual Property – The copyright length of such content as sound recordings will increase from life plus 70 years, to life plus 75 years. Likewise, biological goods such as vaccines receive the benefit of patents lasting up to 10 years.

Energy – CUSMA will grant Mexico direct ownership of all hydrocarbons in its subsoil, meaning that Mexico has greater control over the oil resources that are generated within the country.

Dispute Resolution – The trade deal will preserve a trade dispute settlement mechanism imposed by Canada to protect its lumber industry, and other trade sectors, from anti-dumping tariffs.

At a glance, it sounds like CUSMA bears only positive changes for the trade environment between the three countries. But keep in mind that each benefit may come at a cost to another country, and while CUSMA will provide immense benefits to certain groups of people such as farmers, laborers, and businesses, it may not have as positive of an effect on other groups.

For example, some major flaws in CUSMA include regulatory cooperation provisions that limit the government’s ability to regulate goods in fields such as chemicals, food safety, and the environment. This may benefit large corporations, but could prove detrimental to citizens or the environment with little way to control what is being produced or passed through trade. Canadian family farms may also be threatened by concessions on supply management, and the U.S.’s higher accessibility to Canadian agricultural markets may mean that local Canadian farmers could suffer for it. Pharmaceutical companies are empowered to sell drugs at high costs due to drug protection provisions as part of CUSMA—that 10 year patent could mean that off-brand pharmaceuticals, a cheaper alternative to many commonly used drugs, may not be available for a long time.

Many critics suggest that CUSMA is primarily designed to benefit the U.S. the most, with Mexico being hit the hardest by the agreement. Some believe that Canada and Mexico’s gross domestic product will shrink after CUSMA is passed, and their economic welfare will decline substantially. This could mean a decrease in the household consumption of many of the goods covered by CUSMA’s new provisions. Less consumption means fewer sales for importers of goods from the U.S.

While the advantages presented by CUSMA seemed to target American citizens, Canada can also use CUSMA as an opportunity to gain a foothold in certain fields, such as the ongoing lumber dispute and the incredibly active automobile industry. What remains to be seen, however, is whether these provisions will remain enforceable in the long run.

Ultimately, CUSMA has not yet been ratified. While the agreement was signed back in November of 2018, the details of the trade deal have not yet been finalized, and it could be a while yet before they are. Most likely, if CUSMA is ratified and enforced, we could see the changes granted by this new trade deal rolling out over the next five years. But given some of its major flaws, it’s entirely possible that the trade agreement could be renegotiated again in another ten or twenty years, and CUSMA will go the way of its predecessor: as a piece of history that helped to define the ever changing economic terrain of the North American superpowers.