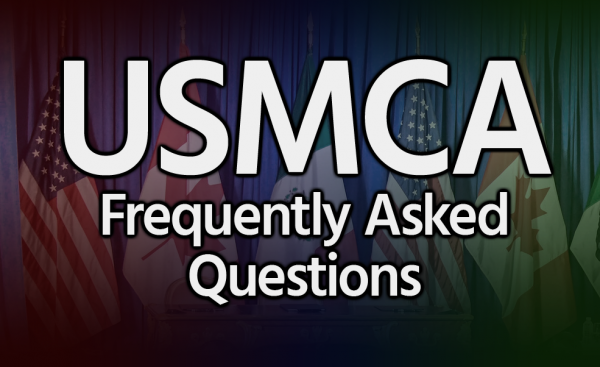 The U.S. CBP have put together a web page full of resources regarding the upcoming USMCA/CUSMA trade deal that will go into effect in a month.

The following resources have been made available:

From CBSA site:  The Canada-United States-Mexico Agreement: What importers need to know

Under heading “Proof of origin requirements under Canada’s free trade agreements” there is the following text:

The value for duty amount for all of Canada’s free trade agreements (FTA) for which the proof of origin is waived, typically referred to as the certificate of origin, will be harmonized upon entry into force of the CUSMA.

The requirement for proof of origin is waived and instead a commercial invoice containing a statement certifying that the good is originating in a country of a specific FTA is required. This statement is required to be in the importer’s possession at the time the importer claims the preferential tariff treatment of that FTA, and is to be provided to the CBSA upon request.

At this time, the regulations requirement is expected to remain; only the threshold in the regulations will be changing.  Of course, given the more flexible requirements for certification of origin in CUSMA, versus the prescribed form under NAFTA and other older FTAs, from a practical standpoint, there are fewer differences between requirements below and above LVS of $3300 (which applies to all imports of goods originating from countries where Canada has FTA). We are looking further into this.

Please note that CN 20-15 was revised May 22nd and, as of July 1st, the CBSA will no longer require a written statement under the proof of origin regulation for shipments where the value for duty does not exceed $3300. As also noted in the revised CN 20-15, this requirement will cease to apply for all FTAs in force as of that date.

2. Can we verify that there will only be TRQ allocations in Canada for goods listed in Appendix 1: Tariff Schedule of Canada?  When will the allocation procedures be announced?

Yes.  There will only be TRQ allocations in Canada for the goods listed in the Tariff Schedule of Canada.

Allocation policies and administrative procedures will be published in the near future.

3. A number of members have asked questions around TPL.  We understand that much of the access and most procedures are staying the same as NAFTA. Given the level of interest and confusion among members – would it be possible to arrange a TPL specific call?

Answer: Awaiting an announcement from GAC, and commensurate agreement on date.

4. The NAFTA Rules of Origin Regulations include an “intermediate materials” designation option for goods that have to meet a regional value content test [Part IV “Materials”, subsection 7(4)].  There is a similar rule but instead referred to as the “self-produced material” designation, for goods that have to meet only a shift in tariff classification rule [Part II “Originating Goods”, subsection 4(8)].

The CUSMA text includes Article 4.8 that basically mirrors subsection 7(4) of the Regulations, but there is no similar provision to subsection 4(8) as far as I can tell.

I am wondering whether you can confirm whether or not the CUSMA Rules of Origin Regulations will carry forward the “self-produced material” rule for shifts in tariff classification, similar to what we have today in subsection 4(8)?

Answer: Awaiting an announcement from GAC, and commensurate agreement on date.

In the interim, Global Affairs Canada have advised that the implementation of CUSMA will not make any changes to requirements for TPL Certificates of Eligibility for imported goods. That is, information in D11-4-22 continues to be correct and certificates of eligibility for TPL goods are not required for goods imported into Canada from the US. However, they are required for goods from Mexico.

5. Please advise whether, under CUSMA, there will be Canadian marking of origin rules to the determine what country of origin is to be marked on a good exported to Canada from the US and Mexico? If yes, will they be similar to the Determination of Country of Origin for the Purposes of Marking Goods (NAFTA Countries) Regulations, in that, in certain instances a change in tariff classification is required?

CUSMA.  In addition, some of the language will be slightly updated, mainly to ensure equivalency between the English and French texts.

6. When can companies begin filing for advanced rulings under CUSMA?

Companies can start filing for advance rulings under CUSMA immediately.

7. Will the uniform regulations include a “self-produced material” rule for both RVC as well as tariff shift rules of origin, as exists under the NAFTA?

No answer provided yet.

8. In the CBSA certification example, the importer section reads: “Note: The address of the importer shall be in a party’s territory, which in this case is in Calgary, Alberta, Canada.”  Can a non-resident company claim CUSMA preferential treatment?  Or put another way,  can a company from the EU apply CUSMA?

So yes, an EU company can claim CUSMA, but it cannot show an EU address only in the importer data element. There has to be a Canadian address or state unknown if not known at time that certification is completed.