Canada’s Fight Against Aluminum Tariffs Is Over … For Now 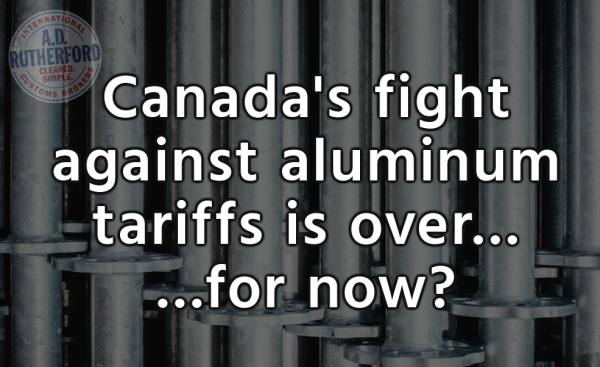 On March 1, 2018, President Trump announced his intention to impose a 25% tariff on steel and a 10% tariff on aluminum imports which came into effect May of 2018.

The U.S., Canada, and Mexico would reach a deal to remove the steel and aluminum tariffs in May 2019. Many of us in the brokerage community welcomed the fact that the additional surtaxes were in fact over. So we thought….

President Trump indicated in August of 2020 that the Canadian industry was trying to “kill all our aluminum jobs with a flood of exports” and it was his position to “always put American workers first”. Canadians were also accused as being “unfair.” The federal government of Canada was informed by the U.S. administration that the new tariff was coming and would apply to unprocessed Canadian aluminum as of August 16, 2020. That date was pushed forward to September 16th.

On September 15, 2020, Deputy Prime Minister and Finance Minister Chrystia Freeland welcomed the decision for the United States to drop duties on aluminum imports. She referred to this decision as “common sense” during the pandemic. Canadians were ready to put in place a retaliation on tariffs being re-imposed. This would be dollar-for-dollar; $3.6 billion in counter-duties were planned.

The Canadian Government is poised to make future decisions on aluminum surtax. Freeland stated, “should tariffs be re-imposed, Canada will retaliate with perfectly reciprocal dollar-for-dollar tariffs.” As stated in the summer of 2020, unless the U.S. dropped its latest round of aluminum tariffs, these counter-measures would be imposed.

As it stands, September 16th, 2020 could have marked the beginning of a trade war, but level heads prevailed and our governments have pulled together once again.